Beginning and course of the competition 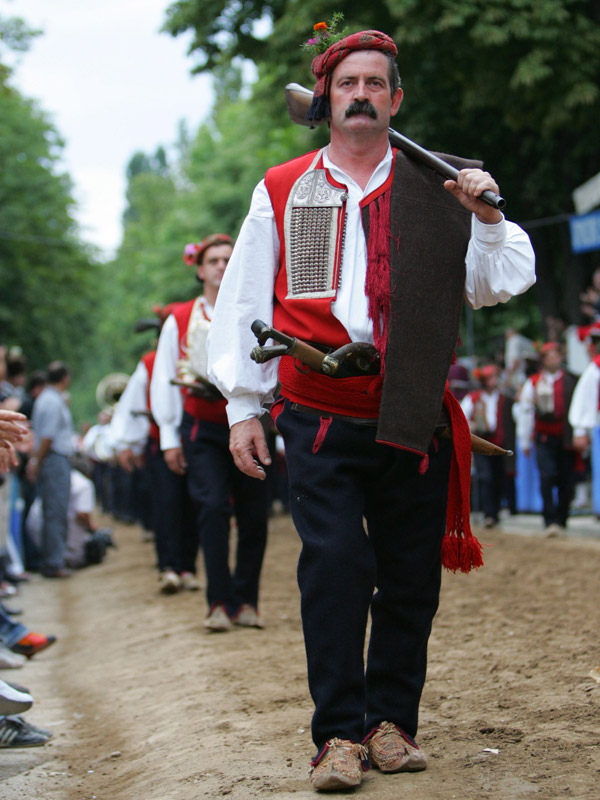 After receiving the order, commander responds: “Yes, sir!” saluting the Duke who salutes in return. After that commander guides the competition; he oversees whether the rope is properly stretched and whether the alka setter has properly set the alka. Upon being convinced that the requirements for the race of every single alkar have been satisfied, he orders the trumpeter to play the call for the race. Before the end of the race commander goes to the starting point of the racecourse, and his assistant takes over his role.
If the alkar runs through, spears the alka and takes it away on the spear, he returns and stands before the alkars’ box to show the judges what he hit into. Then he drops the alka down the spear, salutes, throws the spear to his squire, and then they both go to the upper part of the racecourse. The alkar who has not taken away the alka on the spear does not return.
In honour of the hit in the centre, music and gun firing from the Old Town sound. After that all the alkars run through in the same way. After the first race has been completed, the troop of squires and alkars go in procession to the start of the racecourse, where the alkars remain and squires go back to their places. This is also repeated after the second run has finished.
The competition is carried out in the second and third race in the same way as in the first race. Due to possible accidents or bad weather Duke may shorten the movement of procession.